Rainhill is an ancient village with an Anglo-Saxon name. The name Rainhill is thought to derive from the Old English personal name Regna or Regan who would have been a settler who established the small settlement on a hill overlooking the river Mersey.

The earliest known reference is in 1190 when Richard de Eccleston granted to Alan the Clerk his brother, the vill of Raynhull. Little is known of life in Rainhill in the Middle Ages except that it was a small agricultural community. The bases of two medieval stone crosses still exist in the village. Early records indicate that in 1635 a Henry Thomas was a weaver in the village and in 1662 Edward Halsall carried on the trade of Blacksmith. In 1807 Bartholomew Bretherton, a famous stagecoach proprietor, came to live in the village making his home at what is now Loyola Hall, a retreat house occupied by the Society of Jesus an order of Roman Catholic Priests. By 1881 the Bretherton family owned all the land that makes up the parish of Rainhill.

The two most important events in the history of Rainhill were first, the construction in the mid eighteenth century of the turnpike road from Liverpool to Warrington that ran through the village. Secondly, the village was the venue in 1829 for the famous railway locomotive trials.

In 1829 Rainhill was the venue for the famous locomotive trials that would decide the type of engine which would operate on the new passenger railway. This new railway would be the first intercity passenger railway not only in Britain but also in the world. The engines which took part and competed for the £500 prize were the Rocket, Novelty, Perserverance, Cycloped and the Sans Pareil. The winner was Stephenson’s Rocket on the 8th October, carrying a load of 12 tons, 9 cwt and having an average speed of 16 miles per hour.

George Stephenson also built the well-known Skew Bridge which was opened in 1830 and carries the Warrington Road (A57) across the railway line near the station. This bridge was the first in the world to cross a railway line at an angle. The bridge is now a listed building.

The original station at Rainhill was called Kendrick’s Cross Station after the medieval cross that now stands on the corner of Victoria Street but was originally located on the corner of View Road and Warrington Road. The present station was built in 1870 and is almost certainly the first rebuilt station in the world. The station still retains some of its Victorian charm and is now called Rainhill Station.

At the rear of Rainhill Library is a railway coach which houses a museum containing many items of railway history that commemorate the Rainhill Trials of 1829 and the 150th Anniversary Celebrations held in 1979/80. The Museum is open to the public. 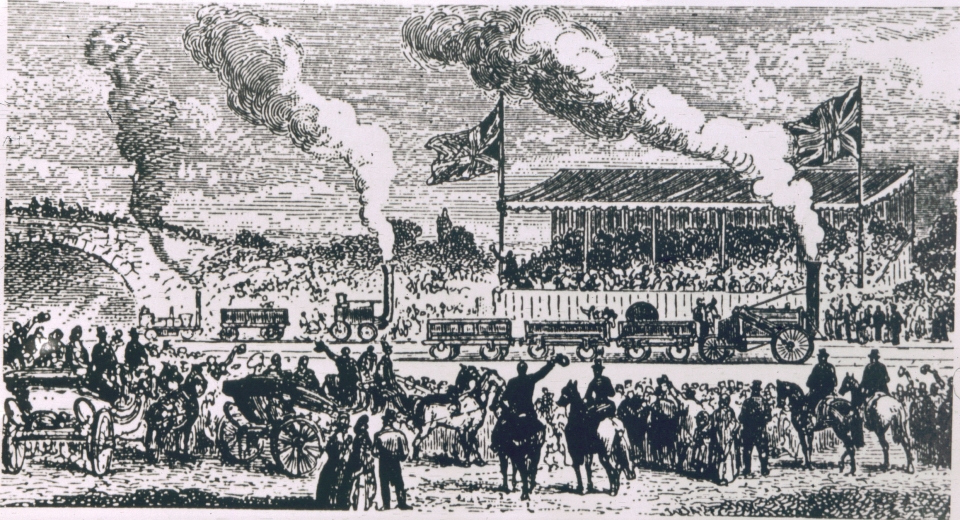 There are no upcoming events at this time.

Please enter the Page ID of the Facebook feed you'd like to display. You can do this in either the Custom Facebook Feed plugin settings or in the shortcode itself. For example, [custom-facebook-feed id=YOUR_PAGE_ID_HERE].